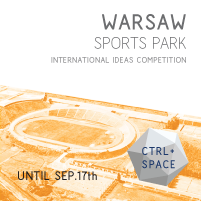 Warsaw is a city bursting with change. Rising into economical prominence in the set of European capitals, it is still in search of its spatial identity. Undergoing a rapid transformation, the city has become a battleground for two clashing visions of urban development: the neoliberal with its appreciation for the ground value and private initiatives, and a more communal vision, underlining the importance of public spaces and accessibility of urban infrastructure. In the heart of this debate is the Warszawianka sports centre in Warsaw’s Mokotow district. Designed in 1954, it is currently in a state of decay. Nevertheless, Warszawianka has not been completely forgotten: a series of voices have been rising in order to reevaluate how this space can be updated to serve present needs and bring back its relevance in the context of the city, as the extremely lauded project that it once was.

The Warszawianka Sports Centre was designed in 1954 by an interdisciplinary team of the Art and Research Unit of the Warsaw Academy of Fine Arts. Under the direction of Sołtan, Le Corbusier’s follower and assistant between 1945 and 1949, this became a project abundant in theoretical issues. By its spatial qualities and intrinsic architectural values, it has since been acknowledged as an outstanding architectural work that integrated different forms of expression and different scales of design within one project. It departed from an elevated discussion of how could the city be planned for the benefits of the human and at the same time capture more poetic aspects of the landscape.

This assignment plans to rescue the memory of the place as a broader sportive complex planned in a privileged natural setting for the wellbeing of the community. In the specific case of Warszawianka, the connection with the wider urban scale, through the green backbone of the city is an opportunity to bring back some of its former dignity. What is intended is a series of strategies that convey the qualities of the original project and contribute to making it visible again in the wider context of the city. This also suggests the consideration over new uses of neglected public spaces. Despite its present state, it is still a location full of intangible qualities, subtle formal gestures that amplify the feeling of communion with nature and the fellow human being. The competition attempts to preserve those immaterial values through a new refurbishment project. In relation with the conceptual values of the original project, the new sports complex should be a combination of sport, art/architecture and the landscape, a project that will be fruitful for the development of the district and give rise to an appealing hub in the context of the city.

This Competition is open to all students and professionals of areas related to Architecture, individually or in group up to 4 members. Multidisciplinary teams are encouraged.

Maria Schirmer – Architect, Head of Architecture and Construction Department of the Mokotów district in Warsaw

A total fund of 5000€ in prize money will be awarded to winning entries and awards of merit. To all the awarded proposals, online promotion will be made through specialized websites and blogs.

5 Awards of Merit, with no monetary prize

Jun. 17th – Launch of the Competition