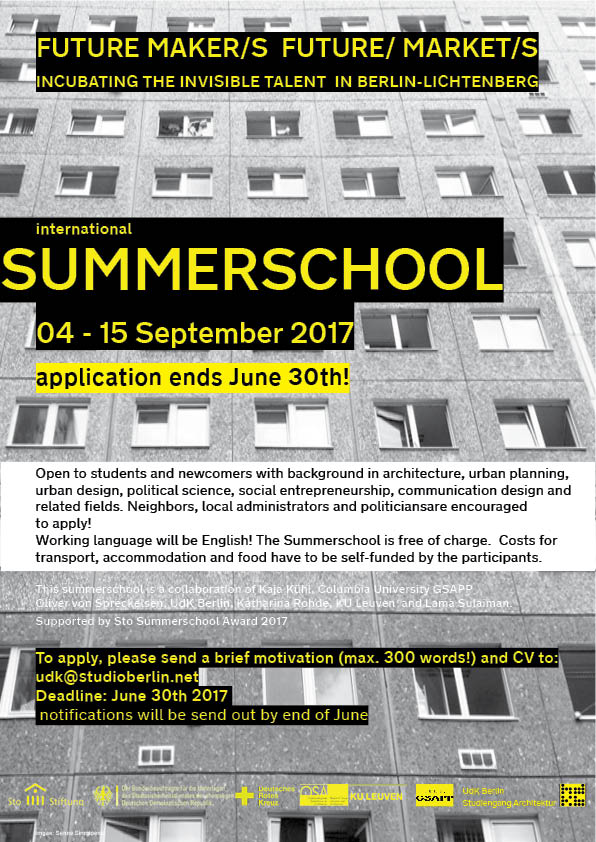 The German capital city of Berlin has received approximately 65.000 newcomers
predominately from Afghanistan, Syria, Iraq between January 2015 and the Summer
of 2016. The majority of new arrivals are hosted in temporary shelters and wait idle
for months, sometimes years, for their asylum to be granted, loosing valuable time
to continue their education or use their brain- and (wo)manpower productively.
During this 10-day Summerschool participants will work in Berlin-Lichtenberg on
the premises of the former headquarters complex of the Ministry of State Security
(Stasi), now home to about 1,600 newcomers among other uses. The entire district
is home to 6.000 newcomers, yet, its urban fabric of predominantly prefabricated
modernist high-rises (Plattenbau), does not appear open to small-scale businesses
or social encounter.
Exploring Lichtenbergs potential for urban spaces of interaction, the Summerschool
aims to provoke thought around evolving pluralist neighbourhoods.
In a first phase, participants will engage with inhabitants of the emergency shelter,
in international teams to visualize talents of “Future Maker/s.”
During the second week, participants will develop prototypes and interventions to
test “Future Market/s”. These can be inside shelter itself, the larger Stasi complex,
or in the surrounding neighbourhood and might include a mobile barber- shop, a
textile workshop, a graphic design office, a cell phone repair shop, or a tea lounge
among other ideas. To incorporate intangible talents, we will also explore the
opportunity to connect to existing local time-banks. Here, time for tasks, errands
or lessons is used as currency and as such, no work permit is required.