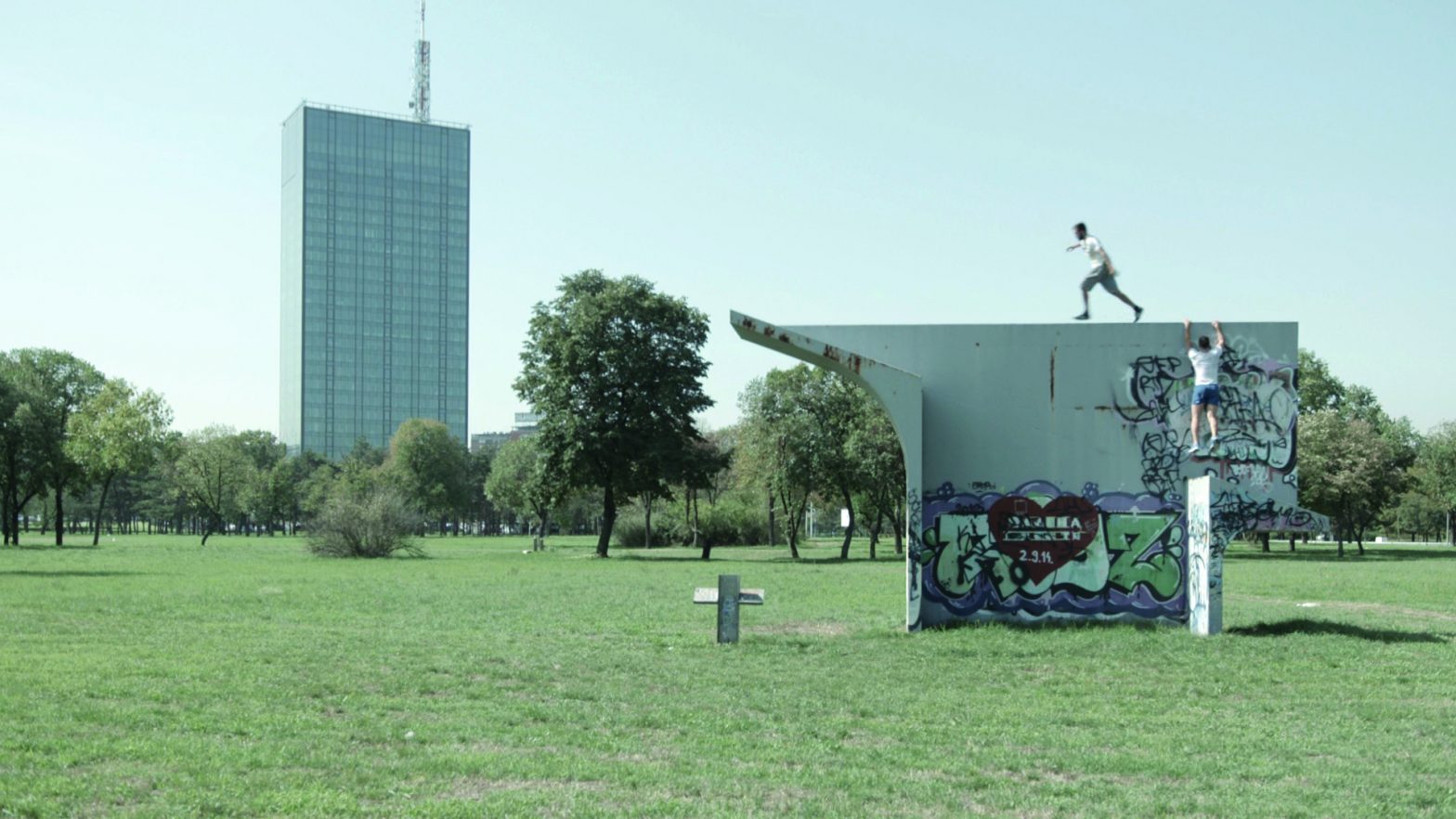 Architektur.Film.Sommer 2017 – Battle for the City
Cinema evenings in the Az W courtyard
in cooperation with Architekturzentrum Wien (Az W) and with the MuseumsQuartier Wien

Vacancies in the growing City

Even in growing cities that are under enormous pressure to increase density it can happen that buildings or even entire complexes stand vacant. Many of these were originally built as status symbols and are the victims of speculation and structural change. The films focus on memory and resistance.

Sava Buildering
AT 2015, 8:20 min, without dialogue, Director: Ulrich A. Reiterer

Starting from Belgrade in the 1970s a performative search for traces is undertaken. In expansive tableaus buildings are used by parcours runners. While crossing various districts of Belgrade the breathing of the sporty actors grows more laboured, entering into dialogue with the existing buildings. Various positions of Marina Abramović and Neša Paripović, who place architecture, the body and city in a new relationship, serve as a reference.

The film shows the ignored legacy of the FIFA world football championships: fully equipped stadiums that were built for a four week championships now stand empty, absorbing funds that are actually needed for basic services in the areas of health, housing and education. The film makers visited the venues of the last two World Cups, Brazil and South Africa, and collected statements from social activists that make clear how global financial interests operate under the cover of football.

Trailer: The March of the White Elephants

In the 1970s the Ihme-Zentrum in Hannover was regarded as the future of the city: planned as a multi-functional city in the city it offered space for around 2000 residents and about 1000 office staff and provided 60 000 m² of retail space. Through mismanagement, speculation and communication failures over the decades the centre has gradually become a ruin for the most part. In 2014 sustainability expert Constantin Alexander moved in in order to analyse why this urban dream failed and to discover how the centre might possibly be revived. Together with filmmaker Hendrik Millauer he found a number of answers.

The film store in Cluj Napoca, Romania used to be the warehouse of the central film distribution firm, which distributed reels of film to cinemas throughout the country. After 1989 it soon became out of date in both technological and economic terms. Small private companies were able to organise more economic distribution and the introduction of digital technologies soon made the entire process obsolete. In the documentary the film store, which has remained empty since the closing of the film distribution firm, served as a background for memories that relate to the cinema, recalled by inhabitants of Cluj.