The evening is dedicated to two visionary housing projects: Frei Otto’s “tree house,” a project for IBA Berlin in 1987, and Harry Glück’s residential park Alt-Erlaa. While in Zara Pfeifer’s Du, meine Konkrete Utopie the inhabitants of Alt-Erlaa talk about the advantages of the numerous common areas of this city within the city, Beate Lendt’s film Der Traum vom Baumhaus also gives us the perspective of architects like Frei Otto, Yona Friedman, Anne Lacaton & Jean-Philippe Vassal, who talk about the philosophy and the sustainable impact of this ecological community project.

Du, meine konkrete Utopie showcases Pfeifer’s visual and sociological discoveries in an expansive series of photographs. Alterlaa is a rare example of the successful implementation of modernity’s highest aspiration—a true machine for living, with nearly one-hundred-percent resident satisfaction for more than four decades. Here, Pfeifer captures its human side for the first time. Kimberly Bradley The documentary “Dreaming of a Treehouse” addresses the Ökohaus, an experimental collective housing project in Berlin, conceived by the famous German architect/engineer Frei Otto for the International Building Exhibition (IBA) of 1984-1987 held in Berlin. Through a series of interviews with the key players involved in the design and realization process, it looks back on the implemented innovative ecological and adaptable design strategies, as well as on the participatory co-design process behind this remarkable building. It is one of Frei Otto’s least known projects, yet a masterpiece and radical consequence of his groundbreaking thinking on adaptability. 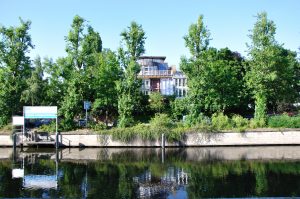 movies in wonderland film nights in cooperation with IBA_Wien

In 2019, movies in wonderland and IBA_Wien are collecting, sharing and telling home stories. Through films & discussions, we will discuss the history and potential future of housing.

On six film evenings between June and December 2019, „Wohngeschichten“ give a broad audience the opportunity to get to know the residential quarters of the IBA_Wien and to discuss topics ranging from the famous Gemeindebau in Red Vienna to the future of ecologically and socially sustainable housing.