A series of shutters in the old town of Genoa were painted by its active citizens of “Cantiere per la Legalità Responsabile” to raise awareness about the possibility of social reuse of confiscates asset in the historical part of the city.

Genoa has seen the biggest confiscation in northern Italy, 96 properties, and thanks to a national law this spaces should return to civic society as a common resource for social projects. The restoration cost is high and the confiscates properties are very hard to recover and to use due to their dimensions and their locationin the medieval Genoa.

As the Municipality take time to find a solution for the regenearation of these spaces that could have a strong urban, economic and social impact, the “Cantiere per la Legalità Responsabile” thought it would be necessary to start using these spaces to regenerate the old town with street art workshops. The aim was to create a critical mass to advocate for the use of these spaces, both involving people during the realization proccess and painting shutters with a conscious message.

The result is a series of drawings that lead visitors trough an unexpected tour of the old town unvealing new possibilities of social reuse. 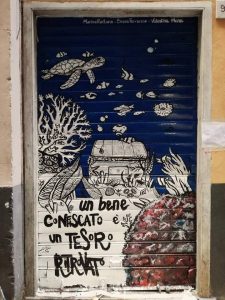 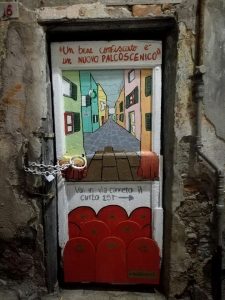